This past weekend I participated in the 21st annual Hood to Coast / Portland to Coast relay.   It’s a crazy fun event.  When I was explaining to my daughter that I’d be gone overnight because I was walking to the beach she looked at me like I was crazy.    In reality there were twelve of us that spent exactly 31 hours 38 min 32 seconds taking turns walking the 130 mile course from Portland to Seaside.   We came in 94th out of 142 in our bracket. 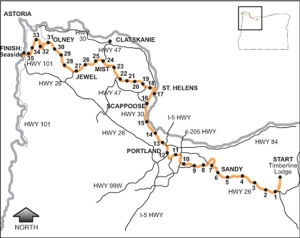 My team is called the Rocket Girls.   We got the name from a daughter of one of the team members.  When she did her first race in 3rd grade or so she told her mom that the way she sped up when she was lagging was to say “GO GO Rocket Girl. GO as fast as the wind”.    We tried her method and found that she’s right.   Go Go Rocket Girl really is effective self talk and doubles nicely as a team name.    Here is a photo of Van One.   I was in Van Two.   Our team spirit was less creative so I’m not showing you a photo of our van.

My sister and I were on the same team.   Here we are nice and perky right at the beginning of the race.

Here we are at the end of the race.   This is after we each walked over ten miles (I did twelve; eight of it in one long hill in the sunshine).   This is also after we slept three hours the night before in our van.   My sister and I shared a seat.   It was cozy…and stinky…and hot.   We’re less perky. 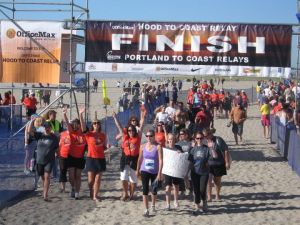 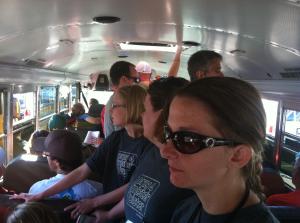 When I got home my daughter asked if I had fun walking to the beach.   Absolutely.   I’ll do it again next year.   I told you.  It’s crazy fun.